Porch Watch 6 - when you though the bird had flown

.
This morning I was sitting at the computer (monthly accounts) and idly looking out of the window. As I watched the swallows swooping round the yard a familiar brownish bird landed on the gatepost with a beakful of dry grass. Yes, it's our very own porch guest back to raise another family. Obviously the bedding needed freshening up after having had 6 babies in it, but she's now back on the nest looking smugger than ever. Where has the last brood gone? Somewhere safe I hope. 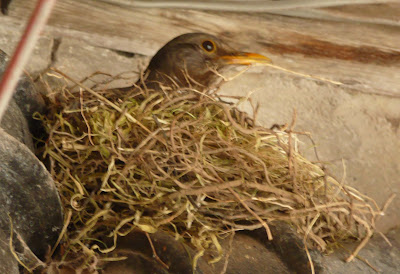 And this is copied from Wikipedia for those who might doubt that the blackbird would come back.

The male Common Blackbird attracts the female with a courtship display which consists of oblique runs combined with head-bowing movements, an open beak, and a "strangled" low song. The female remains motionless until she raises her head and tail to permit copulation.[24] This species is monogamous, and the established pair will usually stay together as long as they both survive.[13] Pair separation rates of up to 20% have been noted following poor breeding.[34] Although socially monogamous, there have been studies showing as much as 17% extra pair paternity.[35]

Nominate T. merula may commence breeding in March, but eastern and Indian races are a month or more later, and the introduced New Zealand birds start nesting in August.[5][25] The breeding pair prospect for a suitable nest site in a creeper or bush, favouring evergreen or thorny species such as ivy, holly, hawthorn, honeysuckle or pyracantha,[36] and the female builds a neat cup-shaped nest from grasses and similar vegetation, which she then lines with mud or muddy leaves. She lays three to five (usually four) bluish-green eggs marked with reddish-brown blotches,[24] heaviest at the larger end;[25] the eggs of nominate T. merula are 2.9 x 2.1 centimetres (1.14 x 0.93 in) in size and weigh 7.2 grammes (0.25 oz), of which 6% is shell.[37] Eggs of birds of the southern Indian races are paler than those from the northern subcontinent and Europe.[5]


ChicksThe female incubates for 12–14 days before the altricial chicks are hatched naked and blind. Fledging takes another 10–19 (average 13.6) days, with both parents feeding the young and removing faecal sacs.[13] The young are fed by the parents for up to three weeks after leaving the nest, and will follow the adults begging for food. If the female starts another nest, the male alone will feed the fledged young.[24] Second broods are common, with the female reusing the same nest if the brood was successful, and three broods may be raised in the south of the Common Blackbird's range.[5]

Montane subspecies, such as T. maximus have a shorter breeding season, smaller clutches (2–4 eggs, averaging 2.86), but larger eggs than merula. They produce just one brood per year, and have a slightly shorter incubation period of 12–13 days, but a longer nestling period (16–18 days).[38]

A Common Blackbird has an average life expectancy of 2.4 years,[39] and, based on data from bird ringing, the oldest recorded age is 21 years and 10 months.[40]