While trying to correct an anomaly in the weather report I managed to completely screw up something else - so if you see an odd graph, or funny figures, please ignore them.

I'm hoping it will all correct itself overnight!
Posted by Unknown at 13:20 No comments:

As ever there is a lot of water about. All day yesterday it fell from the skies, and the fields are so sodden they can't take any more, and it lies in small ponds and large puddles.

But yesterday there was one place with no water - Strickley taps. At dinnertime we turned on the cold tap and nothing came out. Quick investigation showed there was none going to James' house, and more importantly the cattle troughs throughout the buildings. We rang the help line at United Utilities and explained our problem. The magic words were "dairy farm" and 200+ animals with no water. While the call was passed to the engineers Henry and James drove up and down the road to try and spot a burst (the mains runs under the road). There was a lot of water on the road, but nothing gushing. United Utilities arrived and also tried to find the burst.

Meanwhile we began to put contingency plans in place. A few years ago we dug a borehole and eventually connected the water to the main cattle housing (if you search "borehole" you'll see all the details - including the "magic" involved). While there is always plenty of water, the pump does have a tendency to trip, so we have to watch carefully when we use it. So we switched to borehole water and setup a brighter warning light to show if/when it had tripped. We also have a rain harvesting system than gathers water from various roofs and stores in a tall tower, which supplies the heifers. So we gathered as many barrels and buckets etc as possible to fill from that for the calves. It's not safe for us to drink so we nipped to Asda for some large bottles of water. There was still enough water in the hot washing system in the dairy to wash out, so milking was not a problem. And the welly washing trough was full of rainwater, so we had something to flush the toilets!

By now United Utilities had a arrived in force and worked out a plan that involved installing a valve in the mains that meant we would get water from the part of the mains the other side of the burst (I think!). They set up with flashing lights etc and waited for the digger and some special part (from Salford).

** having thought about it, I may have completly misunderstood this - but it does involve a valve of some sort, and feeding from a different "zone".

Having no fresh water in the house we were forced to have a takeaway and wine for supper. We left UU to it and went to bed (having been promised a phone call when they were finished). About 11:30 the pipes in the house started gurgling so Henry got up to check what was happening. Water on tap!

The fix with a valve is just a temporary measure I think as UU still have to find the burst, but we're very grateful for all their efforts in working out a way to get the water flowing to us. We do know that the main impetus was to get water to the stock and parlour, and that if were just a domestic house it may not have been as quick. It puts us in our place!
Posted by Unknown at 10:18 No comments:

Guess what we're having for dinner!

Click here for a clue
We've even got the sneezing courtesy of grandsons
﻿
Posted by Unknown at 12:24 No comments:

A day off tomorrow?

No, of course not. But we do want to have more time indoors enjoying Christmas. So the alarm is set for 5 o'clock.
Posted by Unknown at 15:51 No comments:

Christmas is fast approaching - much faster than usual (or so it seems) - and I've not yet got near the bottom of my "to do " list. All the trees are up, and the kitchen decorated. We're creatures of habit when it comes to Christmas, and tend to use the same decorations in the same way each year. But the results look good. I still have to ice the cake and make more mince pies. Rob, Claire, Izzy and Quinn are coming up tomorrow, so we have to child proof the house - at least make it safe for an inquisitive two year old.

Today I could put a link to an age related song by a popular beat combo (you may have to be as old as me to understand that) - but I used that last February - so click on this instead.
Posted by Strickley at 07:36 No comments:

We have the phone line back, but the fast broadband has vanished. We're back on the old slow version.
(The DSLAM is knocking out the dial tone apparantly)
Posted by Strickley at 11:50 No comments:

. . . really a giant leap forward (Infinity)
then one step back (no phone)
and now, another step forward -

The Smart TV we bought a year ago, really is smart! With the wonders of a long trailing cable and a press of a few buttons, I can access the wonders of I-player and Youtube from a decent sized HD screen.

Technology sometimes works!
Posted by Strickley at 17:05 No comments:

But now the landline isn't working!
Posted by Strickley at 16:04 No comments:

or just catching up with the rest of the world!

I'm not sure what I'm going to do with it - but the opportunities are there
Posted by Strickley at 15:15 No comments:

It's beginning to look a little bit like Christmas

We've bought a tree, brought it inside and removed the net wrapping and left it to spread it's wings a bit. We've found the decorations and lights (in the farthest bedroom), but not done the crucial lights test yet. So one day this week it will turn into a thing of beauty. In the meantime, here's the "before" shot. 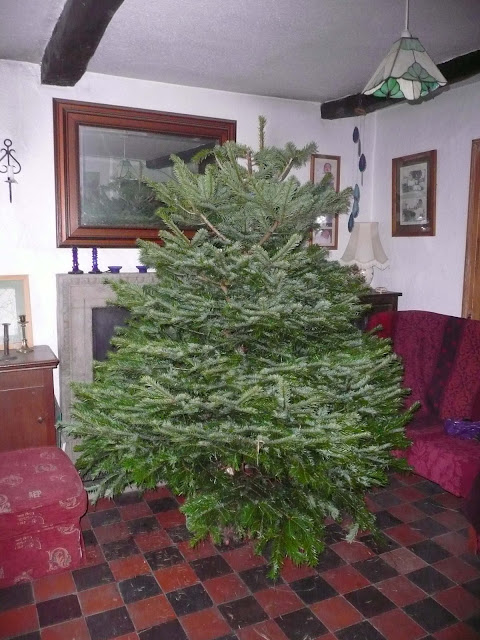 Posted by Strickley at 15:36 No comments:

On Tuesday Henry won £25 in the Westmorland Show 200 Club draw, and yesterday James got an email to say he had won a prize by completing an online survey (20 kg of rat poison!).

Will our luck continue tonight when the results are announced and cups presented for the North West Shorthorn Herd Competition?

Watch this space!
Posted by Unknown at 10:12 No comments:

Back down to earth

We've had the downtime, but we're back to where we were - a very pedestrian broadband speed. Apparently there is a fault somewhere along the line (maybe underground) and that means a different engineer.

What you're never had, you should never miss; but, sad as it is, I was getting excited about catching up with the rest of the technological world.
Posted by Unknown at 13:09 No comments:

Just to warm you - we will be without Internet access for a while tomorrow afternoon. So the weather feeds will not be updated here on the Blog, on Twitter, and on the main Strickley Weather website.

But then - if all goes according to plan - it's To Infinity And Beyond!

Currently our broadband speed languishes about 1.59 mb/s download (and upload is much worse), but BT Infinity has reached us and we're promised 20.2 mb/s! Time will tell if we reach those dizzy heights, but anything will be an improvement.
Posted by Unknown at 17:08 No comments:

. . . so when Henry comes to the door and asks me for a tape measure, I can find one instantly. And a workman's retractable steel measure was no good. It had to be flexible. Why? Well, to measure a bull's testicles of course!

The vet was doing some of the pre-movement checks and tests before Strickley Maximus goes of on his "holiday" to Red Cattle Genetics.
Posted by Unknown at 15:26 No comments:

. . . I'm getting organised. I've bought all the presents and cards (just need to wrap and write!), vaguely thought about menus (turkey, ham and beef in freezer) and today I'm making a Christmas cake. My cooking is a mixture of traditional and hi-tech; 50+ year old Aga (no other cooker or microwave); old balance scales with imperial weights (in fact I have three sets to cover all eventualities from half ounces to several pounds of potatoes), but also the latest digital scales (the sort you put your mixing bowl on and zero etc); large Kenwood mixer and Magimix processor; bread maker (used every night). But today I used the most basic of equipment - a large stone bowl and my hand. The mixture for the Christmas cake won't fit in the Kenwood bowl, so once a year I use a very large stoneware bowl and beat and mix with my hand. 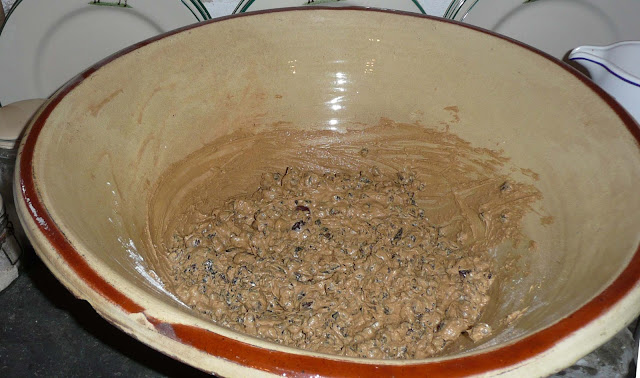 Then scoop into into an old cake tin, that my grandmother had made by a blacksmith. I've been making cakes in it for over forty years, and as far as I can remember, with no disasters. All I have to do now is to remember to put it in the bottom oven of the Aga to cook overnight (about ten hours or so). 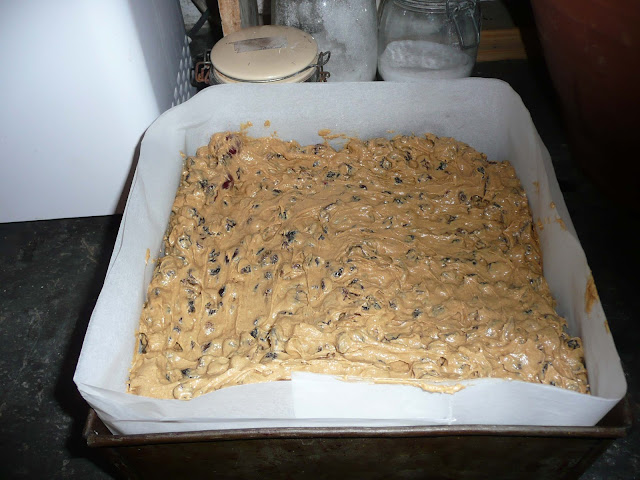 Posted by Strickley at 15:04 No comments:

Ready for the roof 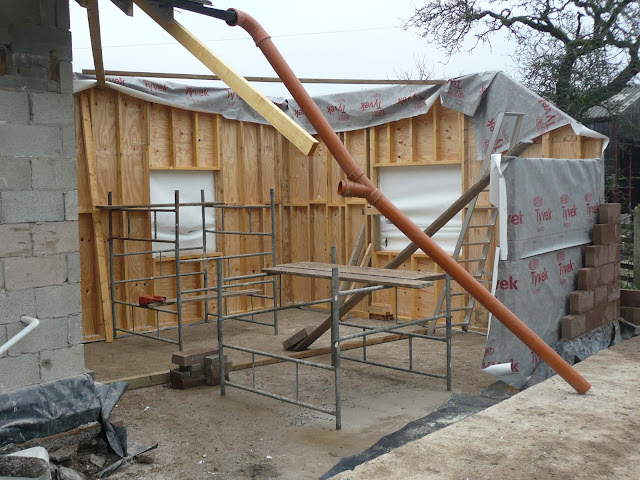 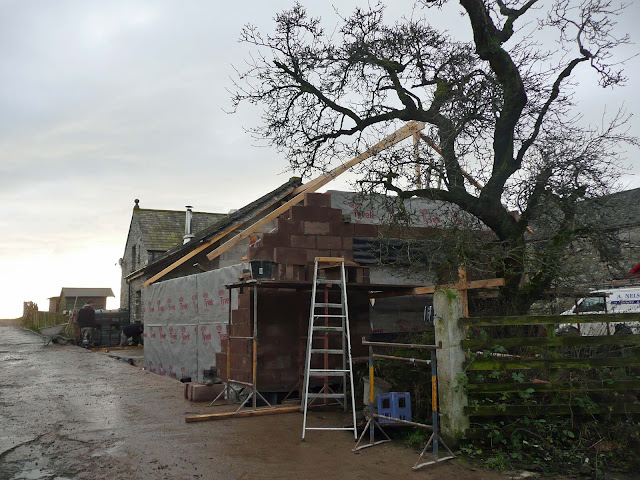 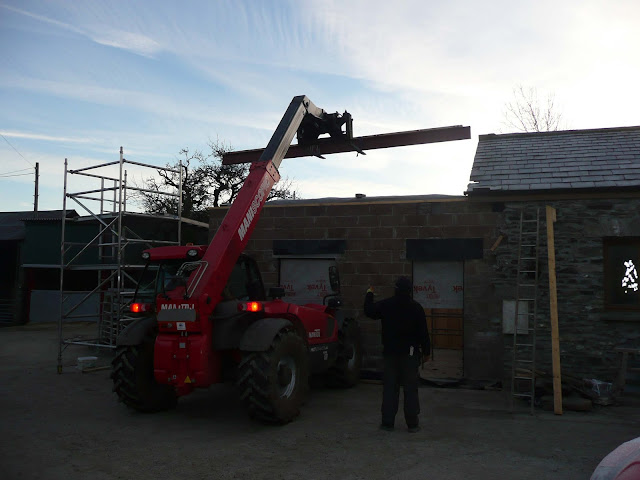 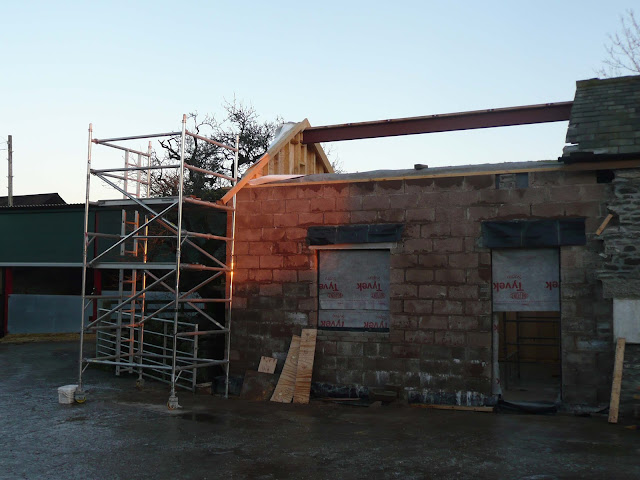 Posted by Strickley at 16:00 No comments:

In the deep mid winter

Strickley otters are still out and about (these videos were captured about 9 at night).

Posted by Strickley at 15:38 No comments:

Click HERE to see the latest statistics from Strickley
Posted by Strickley at 09:01 No comments: