Easier to find us 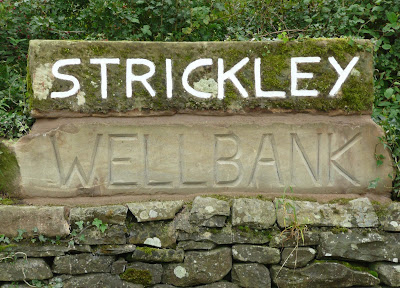 For over 4 years James and Michelle have had a hastily hand written board at the end of the lane, with Wellbank in (now) faded marker pen.
But no more, while Michelle was away last week James carved out an impressive sign (on a lump of sandstone he happened to have lying about) as an early Birthday present. And with the Strickley sign repainted, there's no excuse not to find us.
Posted by Strickley at 15:13 No comments:

It really is GOOD NEWS!

At last we are connected!

For those who have missed their regular weather fix, it's running now with the current status, and it will upload the past 11 days' statistics tonight.

It's been a funny 11 days cut off from the virtual world.
Posted by Strickley at 15:44 No comments:

Firstly, apologies to regular Weather Watchers. As we are still without Broadband (10 days now) I can't give you an up to date view of the weather at Strickley. It is still recording and saving the data on the computer, so if anyone is really really interested, when everything is back to normal, all the graphs and trends will be uploaded.

I've been in daily contact with our ISP and BT (except over the Bank Holiday when everyone shut down except us) and have the possible promise of an engineer on site tomorrow. I will be at home for the next few days so there's also a possible threat that I will lock the door and not let the engineer escape until it is fixed. We thought at first it was the lightening that struck us down, but it has been suggested that the line was too fast for us (at 2 mb) and we were "on the limit". So while everyone gets upgraded to amazing speeds, we get downgraded to a lowly 512 kb. I'm tending to think that this is our ISP's last chance and I'm looking at other options.

And now the Good News (and proof that I'm getting older). Elliot started his new school today. In Leicestershire they move on at 10 (rather than 11). Victoria took his photograph first thing today (before he's played football in the playground or lost his tie). If you want to read Victoria's Blog, get in touch with her as it's by invitation only.
And next week Robert starts "proper school", having been to Pre-school - and Chris moves onto Pre School.
Fletcher is walking and Izzy almost riding a bike, so there's no stopping the younger generation.

And finally, I'm sorry for not replying to emails since 18th - I can read them online (courtesy of other people's computers) but I'm saving them up to reply when we get ourselves sorted.
Posted by Strickley at 13:47 No comments:

All (well some) is safely gathered in

On Friday we mowed about 47 acres - fields that weren't actually standing in water, and enough acres to get in one day. By 6.30 on Saturday it was all in the pit - and James had even had time to judge at the Wensleydale Show.

Not so good news - we had a puncture on the Manitou while rolling the pit (have you tried to get someone to come out on a Bank Holiday Sunday?)

Bad news - it's raining again!
Posted by Strickley at 07:39 No comments:

Well the Good News 1 is they've identified the problem and it will be fixed. The Bad News? Not till next Wednesday (27th).

Good News 3 - we've started mowing again - this time for clamp silage
Bad News - none yet, but there will be if it rains before the grass is picked up.

And, many thanks to James & Michelle for letting me do these updates from their computer.
Posted by Strickley at 14:19 No comments:

If you look at our Weather site, you'll see the time the clock stopped, or rather the time the broadband line went down - 19:45 18th August. There's still no news on when this might change. Today an BT Broadband engineer came out. He confirmed (by plugging in his laptop and modem) that the line is indeed dead. So he went down to the pole at the end of the lane. Dead there also. He then went down to the "Green Box" at Oxenholme. (There always seems to be a BT van there and someone fiddling with the wires). He says the problem is the line from the Exchange is too fast (at 2mb - not that we ever saw anything over 1mb) and we are "on the limit". He is going to pass his findings onto FOL and ask them to reduce the speed. The lightening may have been a red herring, or caused an already feeble connection to give up. I will be contacting FOL later.
Posted by Strickley at 12:20 No comments:

We now have the voice line working, but so far no Broadband.

So no updates to the Weather or Emails (and I can't get on the Internet!)

I've a feeling we may be Broadbandless for sometime (and I'm not going to attempt to use dial-up) as problem seems to fall between two suppliers. So, anything urgent, please ring rather emailing. I can view emails online from another computer, but don't rely on my doing this very frequently.

And what's going to happen in the future? Maybe we should all our eggs in one basket, then if we drop them at least it's only one persons job to fix.
Posted by Strickley at 09:20 No comments:

Last night we were quietly sitting round the kitchen table, discussing plans for the future (a wide ranging discussion taking in seed mixtures, bull types, wind turbines and of course the weather) when the sky, which had been steadily darkening, burst into life with streaks of lightening. A few moments later came the rumble of thunder. I rushed and unplugged the router and phone line. I would rather be incommunicado while the storm lasted than have the equipment damaged. After a while the weather calmed down and I plugged everything back in again. Too hasty! Another flash of lightening and clap of thunder - much nearer this time. Once again everything was unplugged. Later when I was really sure that the storm had passed I went to reconnect. Problem - no lights on the router. I switched it off and on, checked the wall socket, but no joy. Now this is where my Girl Guide training comes in (or paranoia). A few weeks ago I started to worry about the router failing and bought a "Hot Spare" (as similar to the old one as possible) and noted down all the settings etc. So I got it out of the box and plugged it in and dialled into it. The settings were laid out slightly differently but eventually it seemed to be set up correctly. So, time to test - log onto the BBC. No joy. Looking at the router status it seemed to be stuck at "connecting". With panic starting to set in (how will we cope without an Internet connection!) I started to think of other things that may have gone wrong - ie the phone line. That was it - no connection on the voice line, so probably none on the ADSL either. By now it was too late and too dark to phone BT (no mobile signal in the house) so the problem was put on hold till today.

So, if you're looking for the latest Strickley weather, I'm sorry, but it stopped uploading at 7.45 last night.

In the light of day it transpires that Wellbank's phones are also off, so we are in BT's hands. Further updates will follow.
Posted by Strickley at 09:41 No comments:

A Break in the Clouds

At last - about 24 hours without rain, though we have seen it very close to us. So we took a gamble today and cut New Hutton Field. There's no chance of making clamp silage as rain is never far away and we would never get the grass wilted and picked up in time. So it's more big bales. But at least it's a step, a small one, in the right direction.
Posted by Strickley at 18:53 No comments:

(well, since we started keeping records)

Yesterday there was record rain in one hour - 0.827 inches at 16:48. The heavens opened and the rain came down, overflowing gutters and spoutings, washing all the gravel down the lane onto the road, putting 10 inches into the slurry pit and trapping cows across the beck.

If you click on this link you can see the graph. The red line is the rate of rain, and the steeper the steps, the faster the rain. I'm sure there was more really, and it bounced out of the measure. Today it's fine again, but no chance of cutting grass for silage as the forecast is not good.
Posted by Strickley at 09:16 No comments: 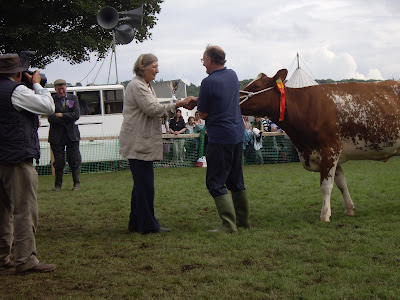 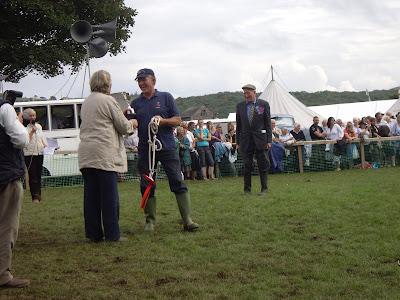 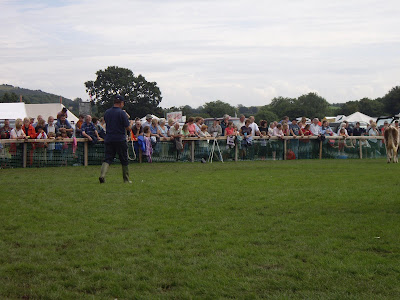 Posted by Strickley at 18:07 No comments:

It's that time of year again, when our grand old lady Geri dusts herself down ready to strut her stuff at Cartmel Show.
Born 12 years ago and in calf again she should know what to do. She'll be accompanied by Fillpail (only 8) and the youngsters Goldie 175, Goldie 173, Athena 3 and Annabella 140.

Look out for an update tomorrow night, though photographs may be a problem in the pouring rain.
Posted by Strickley at 20:04 No comments:

This Year's Must Go Destination

Don't know where to go on holiday this year?
How about a farm holiday with views of stunning countryside and the gentle singing of the birds and mooing of the cows, and with sunshine guaranteed (OK I lied there)?

Note - only born and bred Strickley Robinsons and their friends need apply!
Posted by Strickley at 16:30 No comments: