The alarms went off just after four yesterday morning - even the cows were still asleep when Henry went to get them in. By 6 they were milked and back out in the field, and an hour later the calves were fed, farmers had finished a hasty breakfast and we were ready to set of for Penrith Show with two trailers of Strickley stock.

Access to the field was just and so OK (heavy rain the day before) but stewards kept on top of it with copious applications of wood chippings. And as the day went on and the sun shone and shone the ground dried up

As usual there was a good turnout from the Dairy Shorthorn breeders (9 of them bringing 38 animals between them). There's always a good entry for the calf classes as the main Shorthorn classes are followed by the North of England Calf Show. We hadn't taken any calves this year, but 6 cows and heifers. James is writing a full report of all the winners, but here are the Strickley highlights -

Heifer in calf
1st Strickley Athena 3
.
Cow in calf
1st Strickley Annabella 117
.
Cow in milk
2nd Strickley Dairymaid 2
3rd Strickley Starlet 90
'
Group of 3
1st Strickley group
.
By half past four we were back home and getting the cows in for milking (at least the cars with trailers were, the car with "foot passengers" was still queued waiting to get out of the car park).
.
We finished the evening with a take-away and a few glasses of fizzy pop to celebrate a good day (and our 39th Wedding Anniversary) and by 9.30 gave up the struggle to stay awake and went to bed.
Posted by Strickley at 09:22 No comments:

What's the connection between The Great Yorkshire Show and Leonard Cohen?

I have been a fan of Leonard Cohen's since my college days in the Sixties. I've put up with a fair amount of ridicule from people who don't understand, but gradually the music seeps unnoticed into your consciousness, and I've caught Henry (almost) singing along to tracks in the car. I never thought I would get the chance to see him in concert (last year the tour dates clashed with Henry on crutches), and I always held back from suggesting buying tickets for something that was really just for me. But a couple of months ago I took the plunge and bought almost the last two seats at Liverpool Arena. For a few hours I was happy and full of anticipation, until we realised it was the same day as the Great Yorkshire - at which James was judging. Back to earth with a shattering bump. Cows need milking. Milking needs at least one farmer. Concert too far away to go after milking. So, tickets sold and dreams put aside.

But tonight will be Leonard Cohen night at Strickley. I have the DVD "Live in London"; so I'm taking the phone off the hook, dimming the lights and imagining what might have been.
Posted by Strickley at 08:01 No comments:

Gazebos on the move

Yesterday Old Hutton Pre School had their Summer Outing to Strickley. As Chris's birthday was earlier in the week, this was followed by a party at Wellbank. Mindful of the searing heat we've been having, James and Michelle put up a Gazebo in the garden - decked out with balloons and bunting. 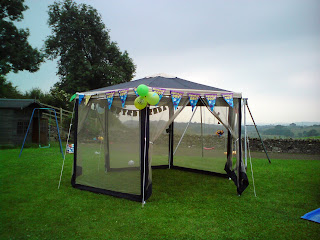 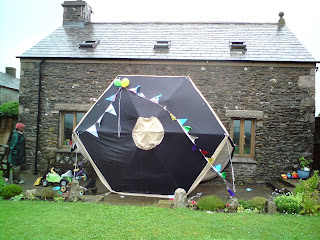 Posted by Strickley at 06:54 No comments: