This glorious much heralded "barbecue summer" is nearly over. Name tapes are being sown into boys' clothes, uniforms checked to see if they still fit (6 weeks is a long time in the growth of young boys), plans made for "early nights" and lunch boxes dug out of school bags.

But the real beginning of the end of summer happens tonight - when the milk cow stay inside for the first time. It's not so much that there isn't enough grass, but that the ground is so very wet and puddly (I think "poached" is the correct terminology).

It's Grayrigg Show on Thursday. This was cancelled at the last minute last year, because of the state of the field. And this year it's no better, but rather than cancel again, it's being moved to Kendal Auction Mart. At least we'll be under cover.
Posted by Strickley at 15:11 No comments:

Sometimes there's a long gap between Blogs because I'm too busy to put pen to paper (or finger to keyboard) and sometimes it's because there's not much happening. It's not that we're sitting around twiddling our thumbs and doing nothing (fat chance of that); but that we're just doing the usual stuff.
After missing Cartmel Show so we could start silaging, we finished on the Saturday. On the Sunday James and family loaded up their and roof box to bursting point and set off on their holiday. After a day at Thomas Land (highly recommended for young boys) they set up camp in Norfolk. No luxury caravan for them, but genuine canvas.
We still have some grass to get in, plus oats which were undersown with grass. So as ever we're weather watching. The first half of September looks to be a busy month, with our almost-local show at Grayrigg, Westmorland Show and The Dairy Event. All fitted round the normal farm work. Watch this space for more news. 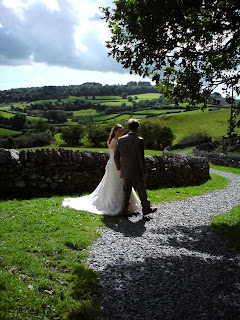 And finally, to show that the sun does sometimes shine in Cumbria, here's a photo taken at a wedding we went to on Saturday - a wonderful sunny day sandwiched between two wet ones.
Posted by Strickley at 07:30 No comments:

.
If you remember as you eat your lunch (and you're not too busy driving a tractor), just after half past twelve, for one second only, the date/time will equal

Today we should have been at Cartmel Show. I'm not sure how long we've been showing there (certainly before we were married in 1970) and have never missed. In 2001 when the show was cancelled because of FMD we entered the photographic version. But we have been watching the weather and waiting for a few dry days, and keeping in touch with our contractor. He's now at the farm before us on his list and it hasn't rained since yesterday. So today instead of showing off our cows at the show we are mowing and getting the pit ready for second cut.

Hopefully next year the weather will fall in line with our schedule
Posted by Strickley at 20:28 No comments:

Have we missed the summer? I know we had the hot weather in June, and hopefully got some good silage (though maybe it was too hot and it wilted too quickly), but since then it seems to have been the all too familiar drizzle interspersed with heavy showers.
We're in the contractor's queue for second cut and are anxiously watching weather forecasts (always believing the most optimistic) hoping for 2 or 3 settled days.
Putting a positive spin on the bad weather it meant we could grab a couple of days away in the caravan. Having left it until the last minute (the day before) we were severely restricted in our choice of site and ended up at Bury! Not in the middle of the allegedly famous market, but on the edge of town in the middle of a country park. It was a lovely site, clean, green and with steam trains passing by at the weekends.

But never again will I navigate a car and caravan through urban motorways and fast flowing traffic that knew when to get into the right lane. Two days of almost relaxation between two journeys not designed for a passenger of a nervous disposition.
Posted by Strickley at 11:06 No comments: